Go to the Mantid Git Config page to ensure that Git is set up correctly before starting.

This page describes the workflow used in conjunction with Git and GitHub for those who have push access to the repository.

Go here or here for a cheatsheet of Git commands.

Go here for a (fairly) comprehensive guide to solving your various Git problems.

We follow the GitHub flow, using branches for new work and pull requests for verifying the work.

The steps for a new piece of work can be summarised as follows:

When naming public branches that will be pushed to GitHub, please follow the convention of issuenumber_short_description. This will allow others to discover what the branch is for (issue number) and quickly know what is being done there (short description).

For an general overview of using pull requests on GitHub look here.

When creating a pull request you should:

A good example is here.

Recommended reading: How to Write the Perfect Pull Request

For further information about the review process see reviewing a pull request.

To check out a particular pull request for functional testing use the test-pr alias that was set up in the Mantid Git Config instructions.

The Mantid Git Config page also provides the follow alias to delete all pr/ prefixed branches, which is useful if you have several:

Pull requests that go an extended period of time without any activity are considered stale and will be picked up by a (partially) automated bot which will notify those that are required to take action in order to keep the review process going.

This is also used to notify developers of pull requests that develop conflicts with the base branch and that fail continuous integration tests, in those two cases the age of the pull request is ignored.

The reasons a pull request may be flagged up currently are:

(code for the bot is currently here)

During the code freeze it is important to ensure that a new branch is created from the correct base branch depending on the scope of the changes:

To merge code with the release branch, open a pull request as usual but instead of using the default merge target select release-next: 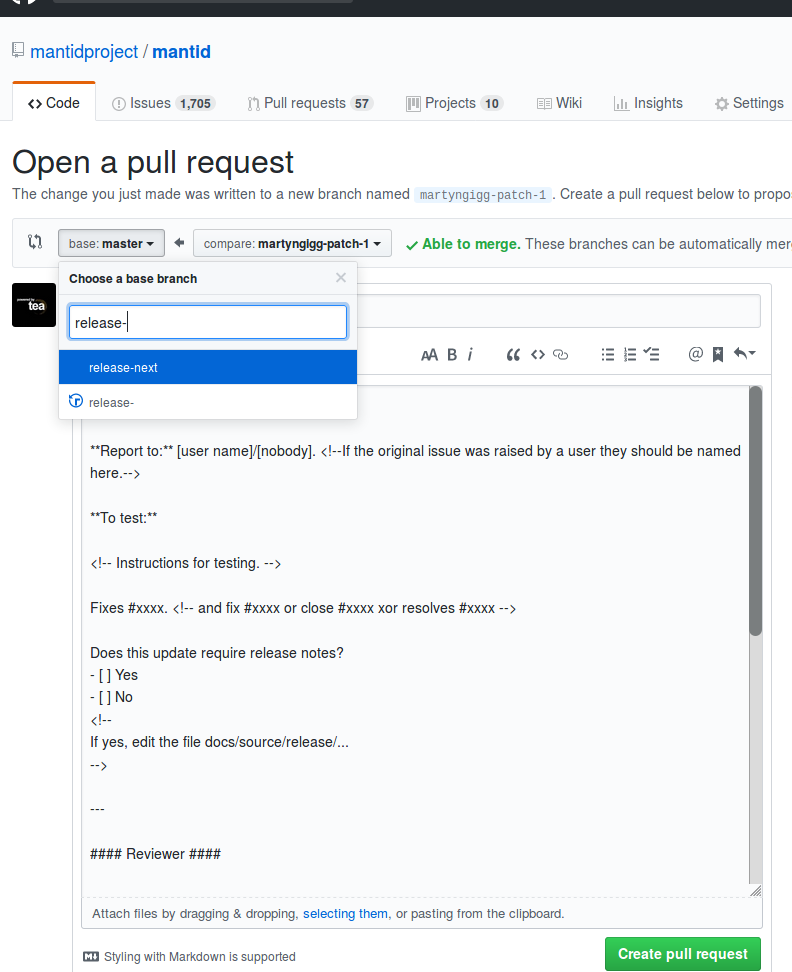 Fixing a PR with an Incorrect Base Branch¶

The target branch on GitHub needs to match the base branch used in the commands above when the branch was initially created. If the compare view shows changes other than your own it is most likely that the base branch is incorrect and it needs to be fixed.

As an example consider the scenario where a branch named topic has been based off the main branch as follows:

where we actually want the topic branch based off release-next instead i.e.

To fix this situation we use the rebase command, providing the --onto option as follows: